A Yard a Famer Can Love 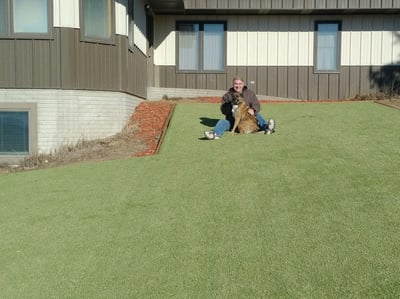 Decades of successfully growing acres of soybeans, alfalfa, hay, and corn bear witness to Nebraska farmer Greg Anderson’s proficiency with plants. Until 2021, it was the bluegrass in his south-facing downward-sloping front yard that gave his green thumb a tough time.

“Typically, it would look good in the spring and then in the summer it took a beating with the sun,” says the Nebraska Soybean Board Director from Newman Grove. “The bluegrass tended to suffer when it turned dry. It was either install underground sprinklers and re-seed or even purchase new sod or do something else.”

That something else was to install SYNLawn’s soy-backed grass in 2021. “I have seen SYNLawn in other parts of the country, even in Central Park in New York City. The variety of applications and landscape options is endless. It looks great wherever it is placed.”

“I like the fact that SYNLawn’s EnviroLoc backing system replaces up to 60% of petroleum-based polyol with a plant-based polyol made from soybeans. As a soybean farmer, that is important to me to be able to use a renewable, sustainable product,” says Anderson who is past chair of the United Soybean Board where he helped oversee soybean checkoff investments in new uses for soy as well as its sustainability.

Anderson praised the Omaha-based SYNLawn distributor, Practice Sports, which worked with him through the entire process, including discussions of how the soy-backed grass would perform at the same time it reduces the environmental impact of maintaining the yard. “No more mowing, weeding, spraying, fertilizing, or watering,” says Anderson. “It’s virtually maintenance free. Rain and snow drain and melt off just like a normal lawn would.”

“The look and feel of the grass is so natural,” adds Anderson who chose SYNBlue 949 from the many options.  “People have commented that they can’t believe it isn’t real grass. With SYNLawn now installed, I have a perfect lawn to enjoy from here on out!

It’s great to live in Nebraska and have green grass year ‘round!” says Anderson.