Inside new or renovated homes and buildings, cabinets, light fixtures and paint colors often capture the most attention. However, what is hidden behind those finished walls and ceilings is one of the most important decisions owners can make. 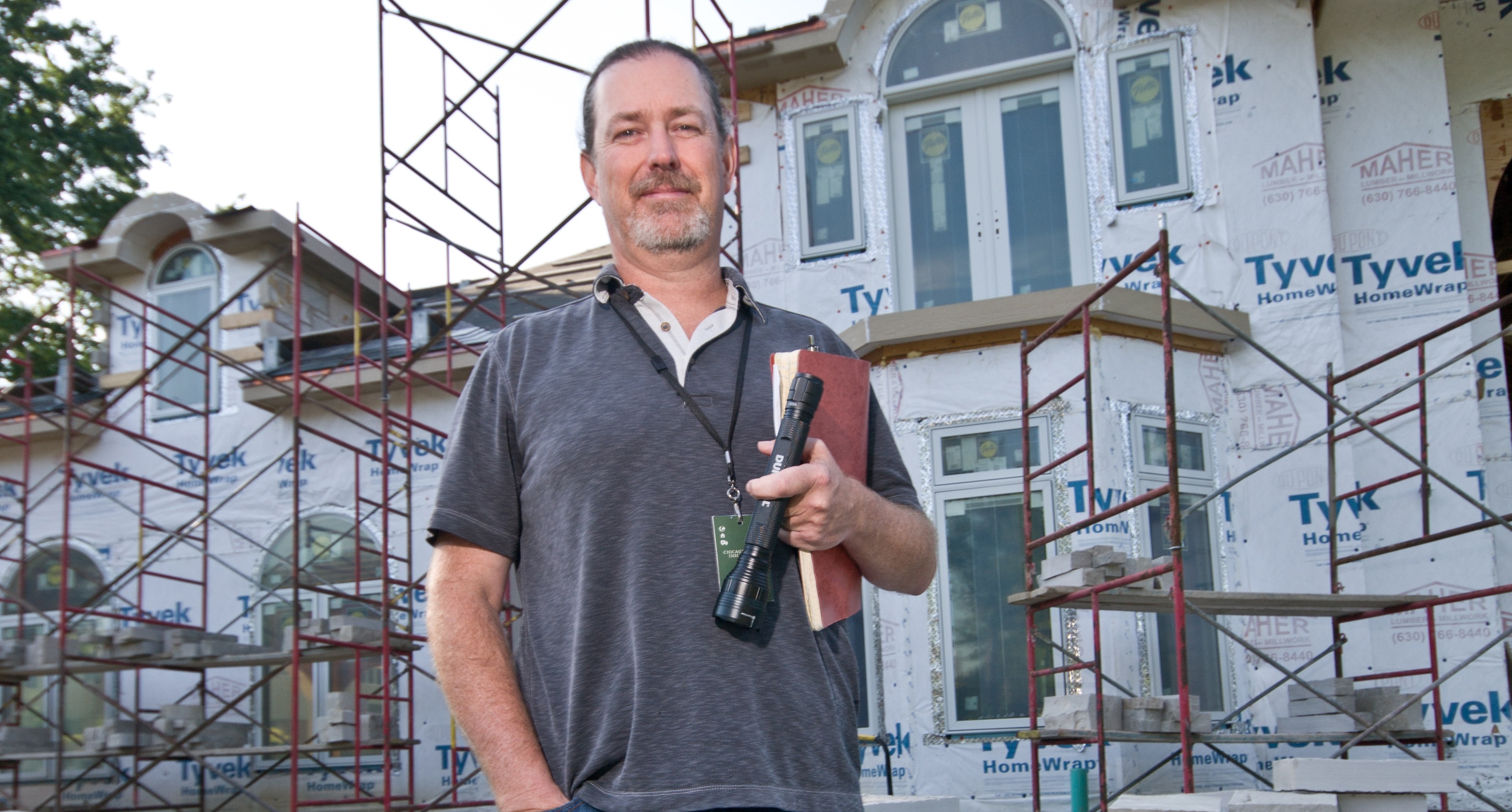 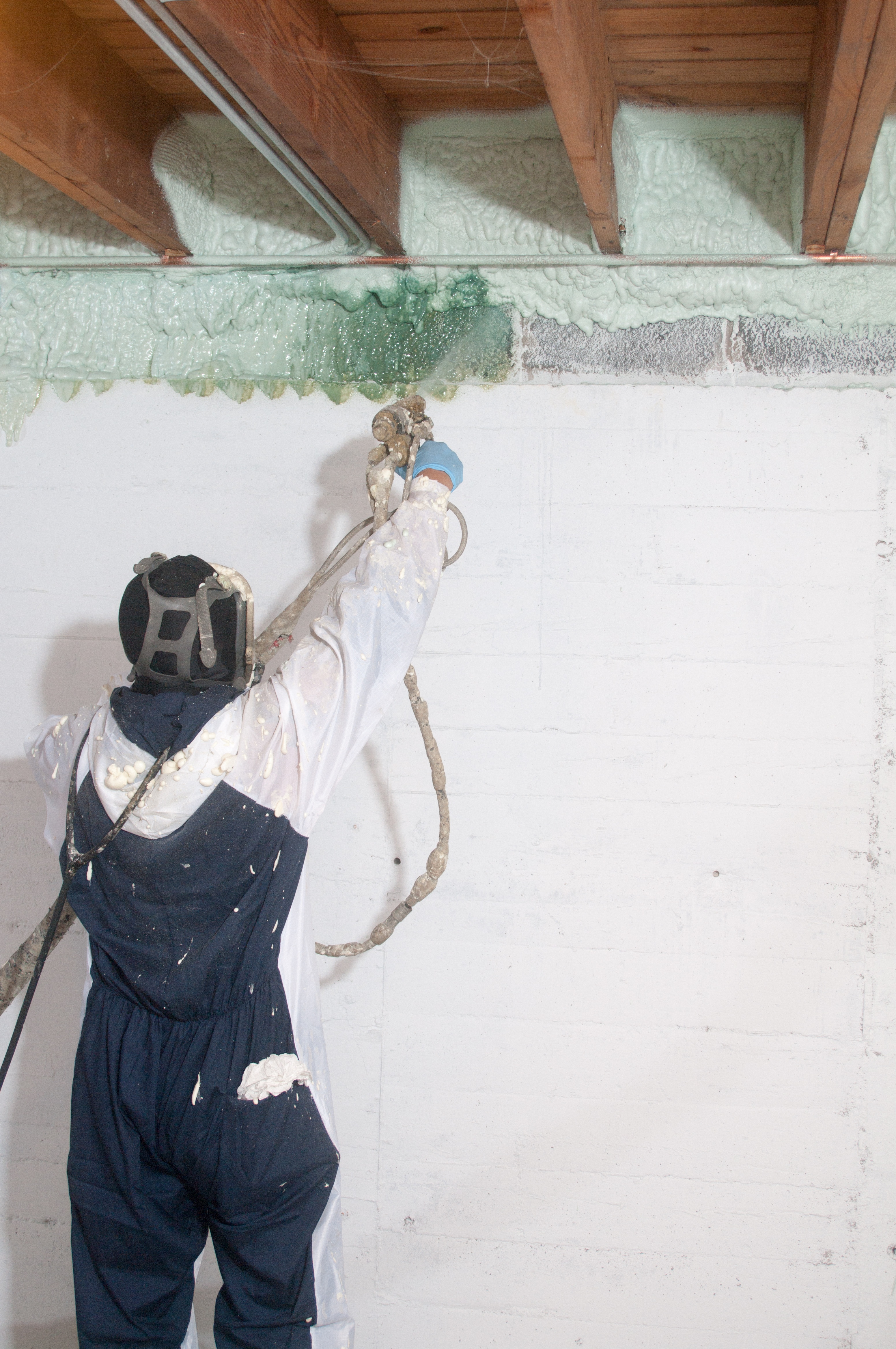 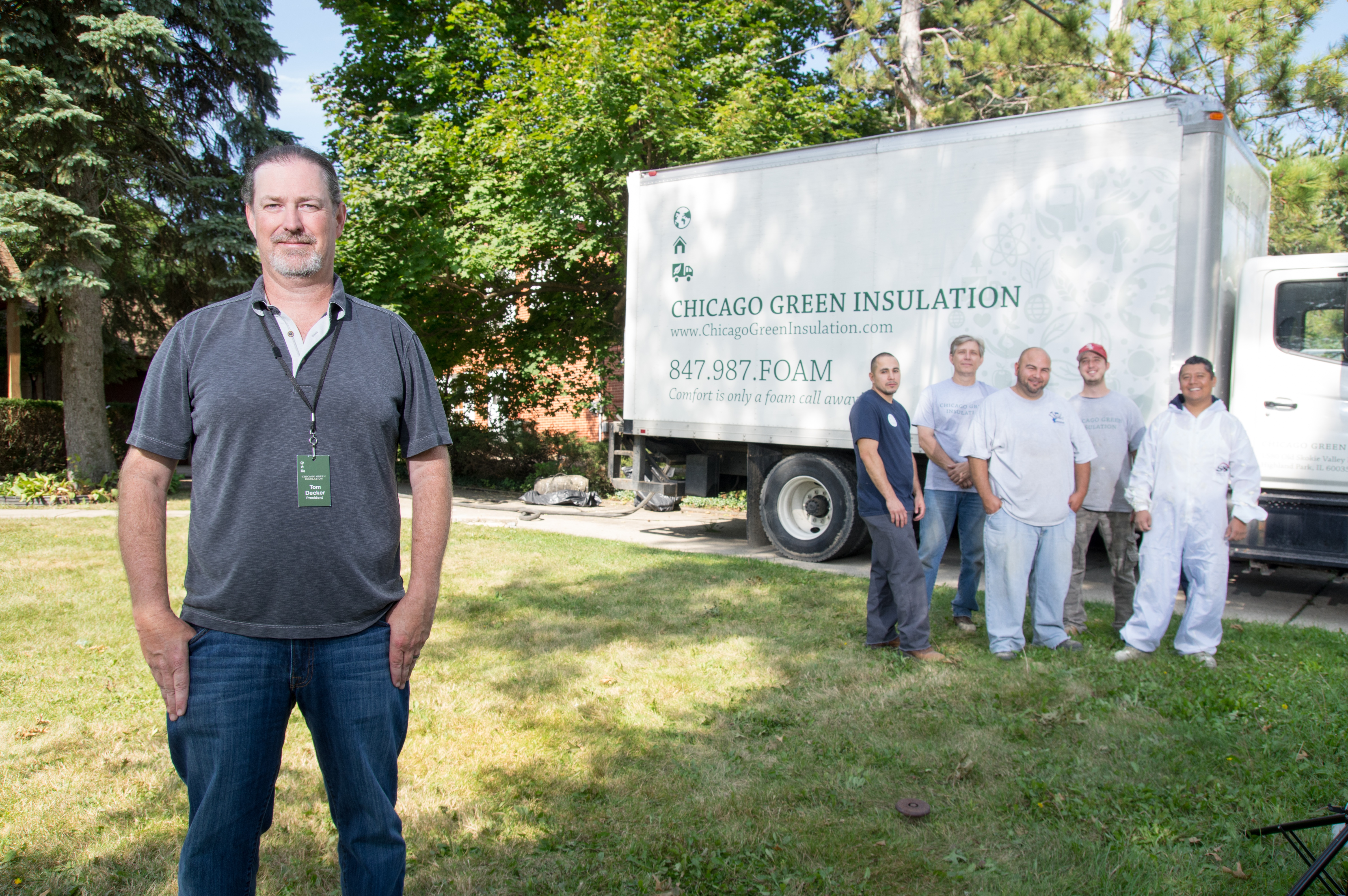 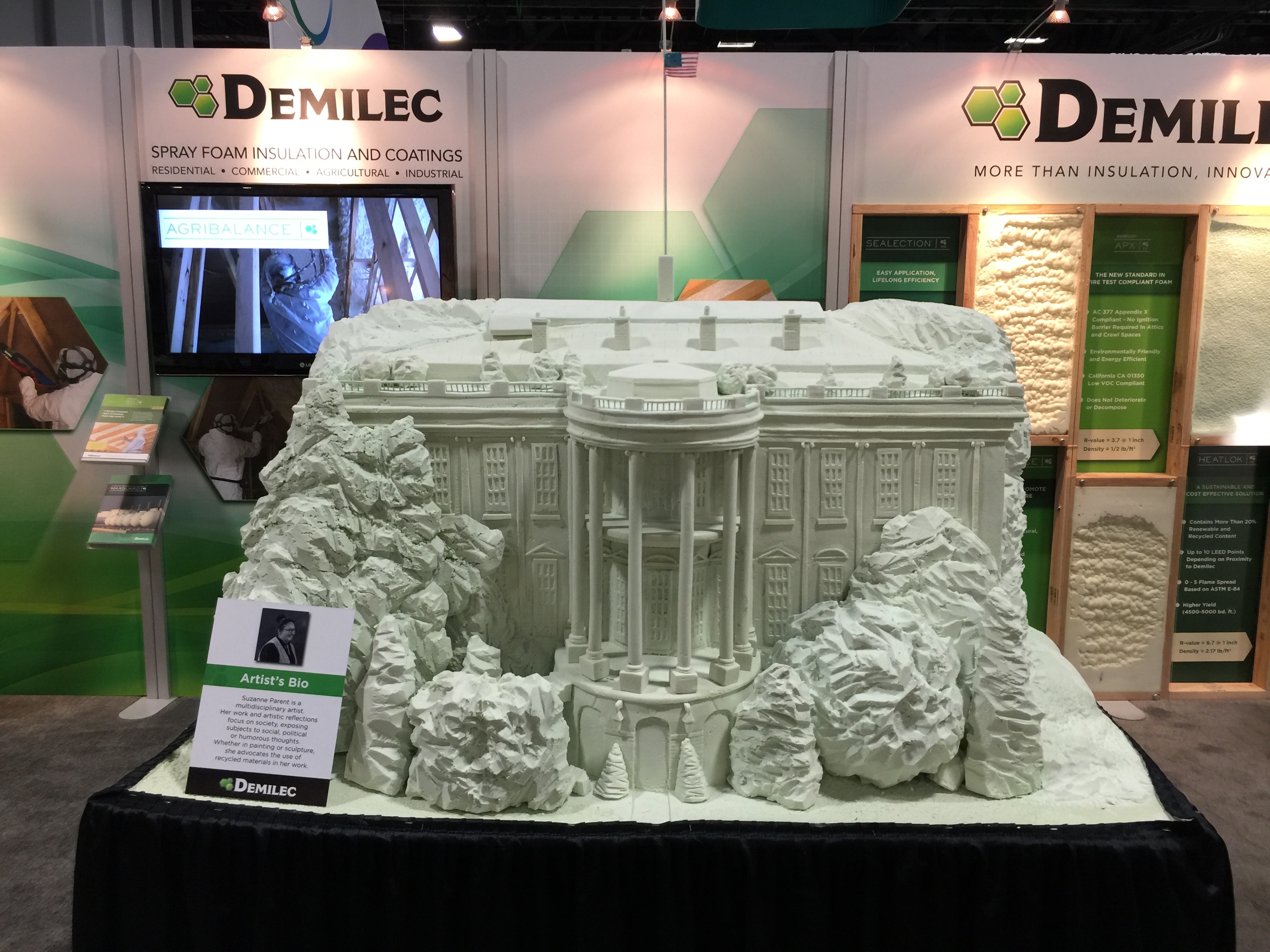 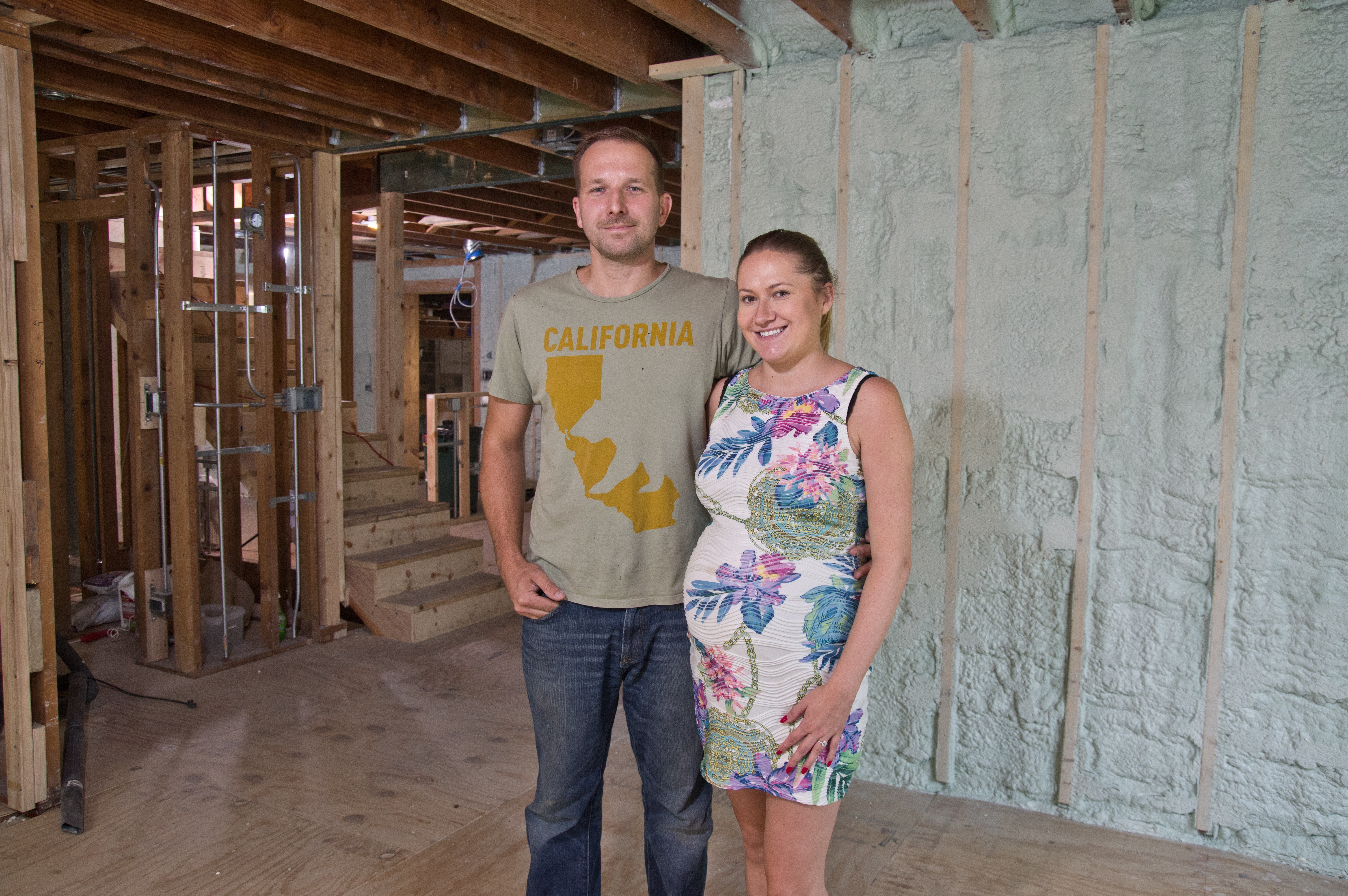 The sound of hammers and saws fill the air in Chicago, as renovation and construction are once again booming. Inside the new or renovated homes and buildings, cabinets, light fixtures and paint colors often capture the most attention. However, what is hidden behind those finished walls and ceilings is one of the most important decisions owners can make – the insulation. 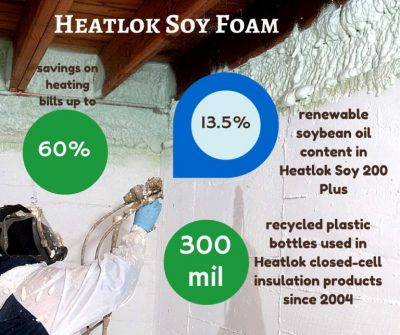 Tom Decker launched Chicago Green Insulation in 2013. Offering spray foam with a renewable soy component as a more energy efficient insulation option became a passion for the Prius-driving contractor. He views the environmental, economic and social benefits as a perfect nexus for a superior product.

“It’s better for our resources to come from above ground than from below ground,” said Decker as to why he sprays foam insulation that uses soybean oil as an ingredient to reduce the petroleum content.

Decker installs Heatlok Soy 200 Plus® in the Chicago area. Demilec, a manufacturer with a new state-of-the-art production facility in Arlington, Texas, makes products that replace a portion of the petroleum found in the polyurethane spray with agricultural-based materials, including soy, which is a rapidly renewable ingredient grown in America.  Spray foam insulation, when properly installed, offers significant benefits. 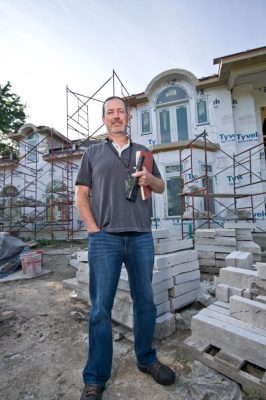 Tom Decker, owner of Chicago Green Insulation, at a job site in Glenview, Illinois.According to Demilec, the benefits of the product include: 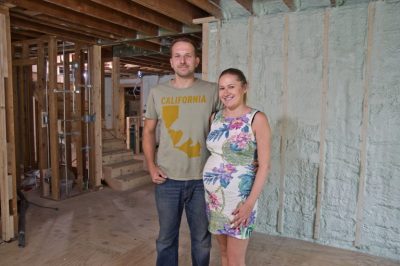 Mike and Margaret Lyczko chose spray foam insulation with renewable soy content to renovate their new Morton Grove, Ill. home. The long-term economic benefits attracted them to the product. During a Chicago winter, it’s not uncommon after snow starts to melt to see a row of houses with their shingles showing through melted snow, except for a lone house with slower-melting snow. That one house likely has spray foam insulation, which unlike its neighboring homes, has not allowed the indoor heat to escape through the roof.

“The difference really is that dramatic and that visible,” Decker said.

It’s a difference that Mike and Margaret Lyczko, a young couple with a baby on the way, look forward to experiencing. They purchased a home in the desirable commuter neighborhood of Morton Grove, Ill., and gutted the 2,100-square-foot 1950s-era home. The Lyczkos chose Decker’s company to install the Heatlok insulation.

“The product may cost more than traditional insulation initially, but anticipating savings of up to 60 percent on heating bills, the payback starts immediately,” Decker said. “It is one of the biggest myths that foam is expensive. While the initial installation costs may be higher, it is actually less expensive over time due to the energy savings.”

It took Decker’s team a little over a day to install the product on the walls and underside of the roof. The product will keep the house warmer in winter, using less energy – which even enabled the Lyczkos to select a 40 thousand BTU furnace instead of the more typical 80 thousand BTU furnace, saving money on the furnace and the monthly costs of heating.

Decker says he gets calls every week where the first question is, “Do you use spray foam containing soy?” Living in one of the top soybean-producing states in the nation, he’s proud to answer he does.

“I clearly understand what it means to farmers to have their soybean oil in this product,” Decker said. “My market may be homeowners in Chicago, but I understand the full circle impact on the state of Illinois. If we can support farmers, they can grow crops profitably and ultimately everyone benefits.”

According to U.S. Department of Agriculture data, about 570,000 U.S. family farmers grow soybeans on the rough equivalent of 60 million football fields, offering an abundant and renewable supply of ingredients for food and livestock feed as well as industrial products. Each year, those soybeans remove the carbon equivalent of taking 21 million cars off the road.1

The Nooks and Crannies: How Spray Foam Works

Jose Ramirez, a worker with Chicago Green Insulation, sprays foam insulation onto the walls of the Lyczko’s home. It hardened and became part of the structure. To apply the spray foam insulation, Decker’s trained workers mix different pre-produced compounds in a mobile lab in the back of the company truck. The crew then sprays the Heatlok on exposed walls, between the beams, and on ceilings through a hose.

The foam product has a higher “R-value” per inch than other types of insulation. According to the Department of Energy, fiberglass averages an R-value of 2.5 to 4.3 at 1 inch.2

“R-value” is an insulating material’s resistance to conductive heat flow, which is rated in terms of its thermal resistance. The higher the R-value, the greater the insulating effectiveness.

There are two types of spray foam insulation: 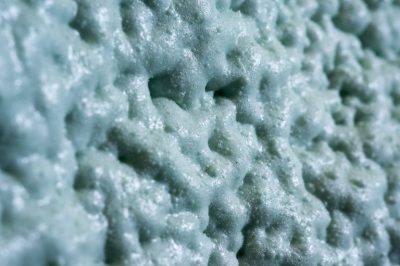 Heatlok Soy 200 Plus is a closed-cell spray foam insulation that also incorporates recycled plastic bottles. According to Demilec, It has a high R-value of 7.4 at 1 inch, and a density of two pounds. The renewable soybean oil content in the polyol used to make Heatlok Soy 200 plus is 13.5 percent. Since 2004, Demilec has used over 300 million recycled plastic bottles in its Heatlok family of closed-cell insulation products, the company says.

The closed-cell Heatlok product makes buildings stronger because it becomes part of the structure itself, holding everything in place and keeping out the wind. Since it bonds tightly to surfaces in the attic, ceiling and walls, outdoor noise is also minimized. 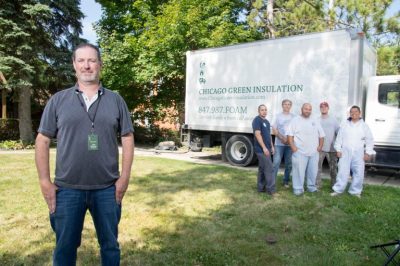 Changing the World, One Inch at a Time

Decker, the father of two young children, is proud of his company’s role in leaving the world a better place – both from environmental and socioeconomic standpoints. He views lowering heating bills as a social justice issue.

“This product is not just for high-end neighborhoods,” he said. “In fact, I get really passionate about installing this in middle and lower-income areas, because they’re the ones who benefit the most from lower heating bills.”

For 20 years, Decker worked in residential youth services, providing programs for kids from the inner city and suburbs to develop and grow. Today, he serves on the advisory board of Community Partners for Affordable Housing, Youth Build of Lake County, and Sustainable Partners for Lake County. He has played various roles with Habitat for Humanity. Decker’s company has helped build several low-income homes in the area with the foam insulation that contains soy. He is also working with non-profits to hire homeless or formerly homeless veterans.

“Tom really understands the situation of those working hard to make ends meet,” said Amy Rosenfeld Kaufman, director of community relations and development for Community Partners for Affordable Housing. “His effort to provide environmentally sound insulation to people at all income levels helps people succeed. Quite frankly, he improves lives by freeing up precious resources for basic human needs.” 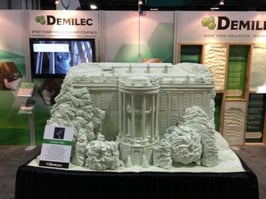 An artist created this sculpture from Heatlok Soy 200, which was an attention getter at Greenbuild 2015 in Washington, D.C. “I think of Chicago Green Insulation as a social enterprise,” Decker said. “Like solar and wind, soy foam insulation is coming into acceptance. You can run a business that is profitable, honest and consistently fair to employees. We are moving into a potentially golden era of making business interests further the values we have for our community and our world. Finally, we’re part of changing the way things get done.”

This case study is provided for information only. The United Soybean Board does not endorse, promote or make any representations regarding any specific suppliers mentioned herein.