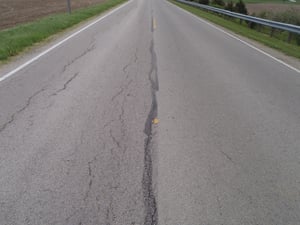 Extending the life of a road paves the way for return on investment so Darke County, Ohio Road Engineer James Surber did a test in 2004. He had a soy-biobased asphalt rejuvenator applied to one-half mile of the most heavily trafficked road in his county. Three miles of that same road went untreated.

“The treated half mile stood up well for 13 years, while the untreated had to be patched and repaired often. In 2017, the entire road was re-paved, and naturally, we used the soy product on the entire road,” says Surber.

The County chose Biorestor® from Asphalt Systems Ohio, Inc. Made with U.S. soy, the product is 95% biobased content and certified under the USDA BioPreferred Program.

As for actual dollars and cents impact, Surber says, “It’s hard to be too specific in all cases because there are so many variables, but in general, we can say Biorestor has shown to extend serviceable pavement life up to 40 percent for a current 13 percent additional investment as compared to untreated asphalt.”

Surber has used the product on other Darke County roads over the years, but not to the extent he would like. “I’m sure we are much like governments everywhere at all levels…Budgets are extremely tight. Yes, this is a cost-saving product, but you can only stretch dollars so far. As much as I’d like to treat all of our asphalt roads with I just can’t do that right now. I use it where I need it the most.”

Robert Cummins, a retired pavement manager for Ohio’s Department of Transportation’s District 7 says, “Saving money by extending the life of an asphalt highway, street, bike path and parking lot is what pavement managers need to consider.

“The average life of an asphalt roadway around here is 10-12 years. But if you use a rejuvenator with soy as its active ingredient right after the asphalt is placed, you automatically extend the pavement life. Further, if you re-treat the same road in four or five years, you add even more life to it.

“It’s cost effective,” says Cummins.  “Even if the cost is eighty-five cents or a dollar a square yard, it pays off if it extends the pavement life an additional two years. If you can extend up to five years, which it usually does, you’re really getting a great return for that investment,” he concludes.

Roger Schulze, a trustee in the Franklin, Ohio Township for 16-plus years, recalls a product demonstration conducted by Asphalt System’s Michael Freisthler. “He poured two identical size samples of fine sand — one on a Biorestor-treated surface and another one on an untreated surface. He then took a hockey puck and smoothed the sand into a circle on each area. When measuring the area, it showed the treated sand area covered an area 30 percent larger. This was due to less surface deterioration on the treated road surface.”

Freisthler explains that according to the National Center for Asphalt Technology, surface loss, or ravel, is the first sign of pavement failure. The demonstration he showed Schulze is an ASTM 965 Standard Test Method for Measuring Pavement Macrotexture used in comparing pavement treatments and untreated pavements surfaces. Because ravel is the first sign of failure, this test helps determine the effect Biorestor can have.

Schulze says that asphalt that is treated with the rejuvenator develops fewer cracks. “That means that when you completely resurface the road later, there are no cracks that show and eventually surface in the repaved road. By following this procedure, we can make asphalt roads last for up to 20 years.

“Two other aspects of Biorestor we like, in addition to the fact it works, is that it’s less toxic to the environment than petroleum-based sealers and it’s made using soybeans that grow right alongside the very roads it protects. We think it’s great that we can support our many local soybean growers,” says Schulze.

Biorestor qualifies for mandatory federal purchasing because it meets the requirements of the USDA-designated biobased category for asphalt restorers and the product also carries the USDA Certified Biobased Product label. Biorestor is available on the GSA Schedule: GS-21F-132AA